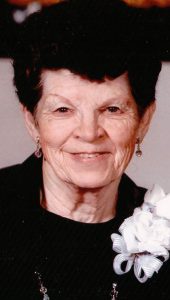 Funeral services will be held at 10:30 a.m. Saturday, March 7, 2020 at St. Michael’s Catholic Church in Kingsley.  Burial was at St. Michael’s Catholic Cemetery.  Luncheon will follow back at the funeral home.  Rosary will be said at 4:30 Friday, March 6 with visitation from 5:00-7:00 p.m. with family present. At 7:00 p.m. there will be a short family led prayer service.  Online condolences may be sent to rohdefh.com.

Jeune was born in1926 Remsen, Iowa. The daughter of Rufus and Opal (Parry) Rhodes.  Jeune grew up in Union Township where she attended school.  Jeune married Donald Vondrak on June 30, 1944 at St. Michael’s Catholic Church in Leeds, Iowa.

Following their marriage, they lived on various farms in Plymouth and Woodbury County. They started their family in 1952 and had eight children.  She was a homemaker and kept very busy raising her children and tending to her flowers and vegetable gardens along with helping Don with the farm and livestock. They met at a dance and continued to dance on the weekends throughout their marriage.  They moved to the town of Kingsley in 1972 and continued to farm north of Kingsley.

They owned and operated Vondrak Feeds in the 1970’s and Jeune worked there and at various jobs in Kingsley after they closed the feed store in the early 80’s. Don passed away in 1996 and Jeune continued to work well past retirement age.

Grandkids were the highlight of her days. She was a member of St. Michael’s Catholic Church and with St. Michael’s Guild and taught CCD classes.

In lieu of flowers, memorials may be directed to a charity or nonprofit of the donor’s choice; St. Michael’s Church in Kingsley, Catholic Charities or Kingsley Speciality Care Auxiliary.