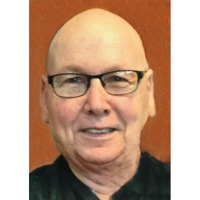 Richard James Olson, of Correctionville, passed away on February 24, 2020 at the age of 69 years.

A funeral service was held at 10:00 a.m. on Saturday, February 29, 2020 at Meyer Brothers Morningside Chapel. Burial will be at Calvary Cemetery in Le Mars. Monsignor Mark Duchaine officiated. Online condolences may be directed to www.meyerbroschapels.com.

Richard, along with his wife JoAnn, a son Daniel, and two daughters, Jennifer and Jessica, lived on a farm outside of Correctionville, Iowa.

He enjoyed spending time with his family and out in nature, hunting, and fishing.  Richard worked at the former Old Home Bakery and retired after 30 years.  Richard is especially remembered for his joyful nature, good humor, and prayerful spirit.

He was preceded in death by his parents, Melvin and June (Anderson) Olson, and his brother, Robert Olson.