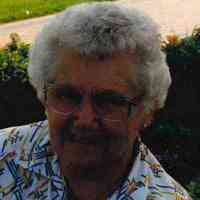 Darlene had battled dementia for the past several years. A celebration of life will be held at a later date. Arrangements under the direction of Waterbury Funeral Service of Sergeant Bluff.

Darlene was born in Waterman Township in O’Brien County, Iowa on August 5, 1920 to Charles and Alice Hays.

Darlene lived most of her life in Quimby, Iowa. She married Vernon Payne April 12, 1942. From this marriage they had five children: Donald, Alice, Dennis, Ardith, and Katheryn. They later divorced.

Darlene then married Jake Sargent on October 14, 1955 in Marshall Minnesota. From this marriage, Darlene also became a stepmother to Roger and Shirley Sargent.

Darlene enjoyed spending time with her family, playing cards and board games. She especially loved to play Scrabble and was a pretty tough opponent. She also liked to cook and needlepoint. She made beautiful afghans that she would share with her children and grandchildren.

She loved to reminisce about the good old days. She loved to tell the story of how she and her two sisters, Sara and Charlotte, used to share a horse that they would ride to get back and forth to school.

She was an excellent caretaker for her parents when their health started to fail.

She was proceeded in death by both husbands; her son Don; her daughters, Alice Dobine and Kay Erickson; and granddaughters Debbie Johnson and Darnell Payne.