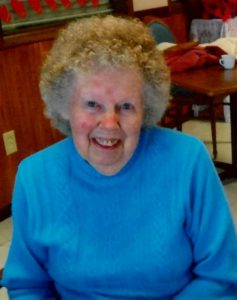 Funeral will be privately held with the family at Rohde Funeral Home in Kingsley, Iowa, with burial to follow at Fairfield Rock Branch Cemetery in rural Correctionville, Iowa.  Online condolences may be sent to rohdefh.com.

Hulda “Polly” E. Schaeffer was born August 6, 1922 — along with her identical twin sister, Hilda — to Ernest and Katherine (Bauer) Schaeffer on a farm rural Pierson, Iowa.

Hulda grew up and lived in the Pierson area most all her life.  She graduated from Pierson Consolidated High School in 1939.

On October 14, 1944 she married Mervin Anfinson at Santa Rosa, California, where Mervin was serving as a Tech Sergeant in the U.S. Army.  After his honorable discharge, Hulda and Mervin returned to the Pierson area, where they began farming with Hulda’s parents.

After retiring from farming they would spend their winters going south, finding that Apache Junction, Arizona was their favorite location to be during winter months until Mervin’s health concerns forced them to remain home.

Mervin passed away March 29, 2009. Following his death, Hulda continued to live in their home until health concerns forced her to assisted living and then to long-term care at Kingsley Specialty Care in Kingsley, Iowa.

Hulda was a member of Salem Lutheran Church and American Legion Auxiliary in Pierson, Iowa.

Hulda was preceded in death by her parents, her husband Mervin, three sisters and one brother.