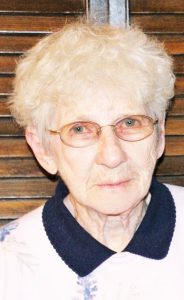 There will be a Celebration of Life service at a later date when the risk of COVID-19 is over. Arrangements are under the direction of Kober Funeral Home of Elk Point. Condolences may be posted to www.koberfuneralhome.com.

Eva was born on March 20, 1936 in Berlin, North Dakota, the daughter of Leo and Ludwina (Geffre) Dunn.

On September 26, 1953, Eva was united in marriage to Merwin Brown. To this union, five children were born: Fay, Joyce, Catherine, Sharon, and Alan. Merwin passed away on October 24, 1988.

Eva married John Myers August 11, 1990 in Jefferson.  Eva worked as a CNA for many years at various nursing homes in California, Colorado, Iowa and South Dakota. She later worked for IBP in Dakota City, Nebraska for several years before working in Elk Point-Jefferson school as a custodian until she retired.

Upon her retirement, she and John moved to Cushing, Iowa with her daughter, Joyce. John preceded her in death on December 7, 2017.