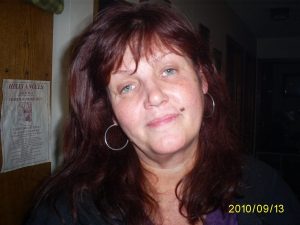 Funeral services for Linda L. Scott, age 60, of Galva, are pending at the Nicklas D. Jensen Funeral Home of Holstein.  Linda passed away on Monday, March 30, 2020 at the UnityPoint Health – St. Luke’s of Sioux City.

One of Linda’s first jobs was working at The Palomino Club in L.A., and she loved that. Linda came by train to Iowa in 1991 — so much for the big city. She has lived in Sioux City, Correctionville, Holstein and Galva.

Linda had many skills; she was a Master Chef at several distinguished restaurants.  She worked VT Industries Door Department and Prism Marketing. If anyone could sell an ice cube to an Eskimo, that’d be Linda.

Linda’s interests were fishing, camping, casinos, and spending time with her many friends. Her real passion was her artwork; she was quite the master of that. Linda never had children, unless you count her 20 cats.  She was very outgoing and fun to be around. Linda, you will be missed by many.  We Love You.

Linda was preceded in death by her mother, Joyce; her father, Carl; her grandma, Gladys Scott; her grandpa, Jaime Scott; and her aunt, June Hays.