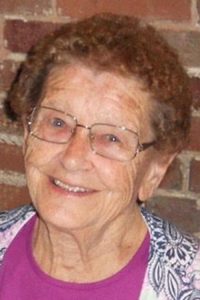 In light of the recent COVID-19 pandemic, private family graveside services will be held. A memorial Mass will be at a later date. Arrangements are under the direction of Meyer Brothers Colonial Chapel. Online condolences may be directed to meyerbroschapels.com.

Bernadine was born the daughter of Leo and Emma (Meyer) Sitzmann on March 8, 1928, in Sioux City, Iowa. She graduated from Cathedral High School in Sioux City.

Bernadine married Richard “Dick” Feauto on Dec. 26, 1949 in Sioux City. They made their home in Sioux City but did spend a few years in Correctionville, Iowa. Richard passed away in 2009.

After raising her children, Bernadine worked for many years at the Woodbury County Courthouse. She also worked for Warehouse Market and Long John Silver.

Family was most important. She loved spending time with her children, grandchildren, and great-grandchildren. She also enjoyed playing bingo, gambling, and watching Matt Kuchar on the PGA Tour. She was a huge Notre Dame and Iowa State fan.

She was a member of St. Boniface Catholic Church.

She was preceded in death by her parents; her husband, Richard; a brother, Leo; and a sister, Betty.

In lieu of flowers, memorials may be made to Trinity Heights Queen of Peace in her name.