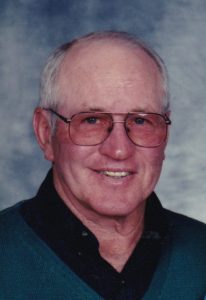 Due to state and federal guidance on gatherings due to the COVID-19 pandemic, a private family graveside service will take place at Trinity Lutheran Cemetery in rural Hinton, Iowa. Reverend Steven Stoll will officiate.

Arrangements are with the Rexwinkel Funeral Home in Le Mars.  Expressions of sympathy can be extended to the family through www.rexwinkelfh.com. Memorials can be made in Everett’s name to the Casper American Legion Post 477 in Hinton, Iowa.

Everett Duane Bollmeyer was born February 12, 1934 in Correctionville, Iowa, the son of Edwin and Violetta (Kasch) Bollmeyer.  He was baptized in Correctionville and confirmed at Trinity Lutheran Church in rural Hinton, Iowa.  He attended country school near Hinton and graduated from Hinton High School.

He was united in marriage to Betty Bock on February 19, 1954 at Trinity Lutheran Church in rural Hinton.

He enlisted in the United States Navy in 1955.  He was stationed overseas during the Korean Conflict.  He was honorably discharged in 1957.

Following the service, he returned to the Hinton area and began farming with his uncle, Clarence Kasch.  He and Betty farmed and raised livestock until 1978.  He went to work for Plymouth County Secondary Roads.  He retired after 21 years of service in 1999.  Everett then drove school bus for the Hinton School District until 2009.  Betty passed away December 10, 2004.  Everett continued to live on the farm near Hinton until March of 2017, when he moved to Whispering Creek Assisted Living in Sioux City.

In October of 2019, he became a resident of Sunrise Retirement Community in Sioux City.

He was a longtime member of Trinity Lutheran Church and the Casper American Legion Post 477 of Hinton where he participated in the color guard for many years.

Everett enjoyed golfing and ballroom dancing.  He and Betty enjoyed traveling and took many trips over the years.  Most of all, he loved the time spent with family, especially his grandchildren.  He enjoyed watching them in all their activities.  He always made sure that he checked the newspapers following an event and then he cut the articles out and made sure each child received a copy of the article/picture for their scrapbooks.

He was preceded in death by his parents, Edwin and Violetta Bollmeyer; his wife, Betty Bollmeyer; his brother, Eldo Bollmeyer; a great-granddaughter, Paige Weber; his in-laws, Merlin (Donna) Bock, Ronald Bock, and Kenny Bock; and two nephews, Dean Bollmeyer and Doug Bock.

The family would like to offer a special thank-you to the nursing and aide staff of Sunrise Retirement Community and Whispering Creek Assisted Living.