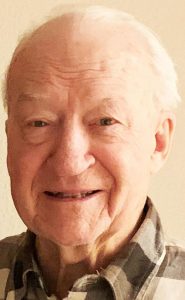 A private family graveside service will be at Memorial Park Cemetery in Sioux City. Online condolences may be made to the family at www.christysmith.com.

Richard was born Dec. 2, 1939, in Sioux City, to Jorgen and Astrid (Anderson) Birk. He grew up in Bronson, Iowa, graduating from Bronson High School in 1958.

He entered the U.S. Air Force after high school and served four years active duty. He continued in the Air National Guard and Air Force Reserves from 1962 to 1993. When he retired, he had earned the rank of Master Sergeant.

Richard was a graduate of Morningside College and held a Master’s degree in education.

In 1964, he married Karen Shelton; the couple had one son, Douglas. Richard was employed with the Sioux City Public Schools for 34 years as a math teacher serving at both Woodrow Wilson Junior High and Herbert Hoover Middle School, retiring in 2003. Karen passed away in 2000.

In 2003, he married Sandra Gau in Sioux City. The couple lived in Sioux City until last fall when they moved to Sioux Falls to be closer to family.

He valued spending time with his family. He enjoyed basketball, baseball, and telling stories. He especially loved traveling; he and Sandra traveled to many places around the world, but his favorite trips were Hawaii, Alaska, and Europe.

He was preceded in death by his first wife, Karen; his parents; and two brothers, Neils and Earl.

Memorials may be directed to the Siouxland Humane Society in Richard’s name.