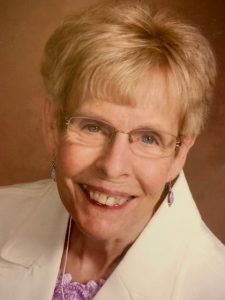 Linda Rae Lander, 77, of Galveston, Texas, formerly of Onawa, passed away peacefully on April 27, 2020 at home in after a brief illness.

A celebration of life will be held in Onawa, Iowa late this summer, at a date yet to be determined.

Linda was born on Nov. 5, 1942, in Hornick. She spent her childhood in Onawa and married Benjamin Lander in 1959. Linda worked at IBP as a keypunch operator after she and the girls moved to Homer, Nebraska in 1969.

Linda yearned to see the country and expand her horizons, so she moved to Salem, Oregon in 1980, and began working for Winco Foods where she subsequently met her soulmate, Lee Goss. Linda and Lee loved the outdoors and spent time camping, fishing, going to the coast, or working in the garden.  They then moved to Idaho for a few years, and after retirement, on to Texas to be closer to her daughters. In 2007, they moved to Onawa to be nearer to her siblings and classmates.

Winters were spent in Lake Havasu, Arizona, where they enjoyed time spent with the many friends they met, going to the doggie park, playing pickleball, and especially taking trips to Las Vegas.

After losing Lee, Linda moved to Galveston and made friends quickly at her independent living facility and enjoyed the warmer weather, walks on the beach, and spending time with family.

She is survived by her daughter and son-in-law, Laurie and Kelsey Maxson of Galveston; her daughter, Lana Lander of Galveston; sisters Cynthia Fitzgerald of Sioux Falls, S.D., and Brenda Sorenson of Onawa; a brother, Russ Kirkpatrick of Des Moines; and her favorite brother, Lee Kirkpatrick of Onawa. She had many nieces, nephews, cousins and close friends that she also loved dearly.

She was preceded in death by her mother and father, Esther and John Kirkpatrick; her idol, Elvis Presley; her daughter, Lynnette McGrath; and her husband, Lee Goss.

Linda will missed for her humor and wit, a beautiful smile, her honesty and integrity, and her willingness to always help those in need. She was charitable, loyal, loving, and a joy to be around.

Linda was a proud and patriotic American. She would have liked any donations to be given to the Monona County Veteran’s Museum.