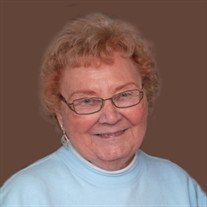 Due to COVID-19, a private funeral service was held Wednesday, May 6 at 10:30 a.m. at Christy-Smith Funeral Homes, Morningside Chapel. Burial was at Gilman Township Cemetery in Ashton, Iowa.

Lorraine Ruth Feldman, the daughter of Reinhard and Louisa (Vaupel) Feldman was born November 28, 1927, in Ashton, Iowa. She was educated in a country school and graduated from George Community High School.

On November 5, 1949, Lorraine was united in marriage with Alvin “Rowdy” Henning in Sioux City. She worked for Novelty Machine for five years. She was then employed as an office manager and administrative assistant for the Woodbury County REC for 37 years. Rowdy died October 24, 2016.

Lorraine was a member of Trinity Lutheran Church in Moville, Meadows Country Club, the Garden Club, SMILE, and the Red Hat Society. She enjoyed ceramics in her spare time. The couple had also wintered in Apache Junction, Arizona since 1985.

Lorraine is survived by two sisters, Myrna Heronemus of Ashton, Iowa and Iva Jean Ott of Davenport, Iowa; numerous nieces and nephews; and many other relatives and friends.

The family has requested that memorials be directed to Hospice of Siouxland.