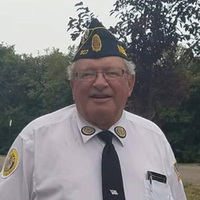 Arrangements are with Meyer Brothers Funeral Home. Celebration of Life will be at a later date.

Wayne was born December 25, 1942 in Storm Lake Iowa.  He was the son of Dick and Bea Linden. Dick was Wayne’s stepdad, but Wayne was so proud to say, “This is my Dad”

Wayne graduated from high school in Early, Iowa in 1960. He proudly served in the Army in Vietnam from 1964 to 1968. On August 14, 1971 he married Jelane Sadler, daughter of Ralph and Theo Sadler at Rock Branch Church.

They lived in Ames lowa and then made their home in South Sioux City, Nebraska where they were blessed with three children.  He worked for Isemans, Braungers, Boyer Valley, and Conagra.

He was a member of St. Paul Methodist Church and was active with the veterans. Spending time with his family was very important to him. He enjoyed camping, fishing, going to his grandchildren’s activities, playing cards, and listening to Gospel music. He was always smiling and ready to give a helping hand.

He was preceded in death by his parents, Dick and Bea Linden; his grandparents, Roy and Katie Robson; aunts, uncles and a niece.

Thank you Wayne for all the beautiful memories you gave us. Our love is with you always.