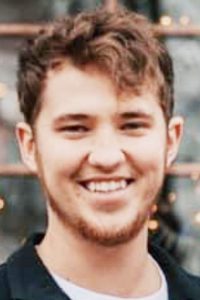 Chris Baker, 24, of Sioux City, died after a lifetime battle with depression on Saturday, May 9, 2020.

Memorial services were at 11 a.m. Saturday, May 16 at Calvary Lutheran Church. The service was streamed via Facebook at www.facebook.com/calvaryleeds and broadcast on radio station 106.1 FM. The Rev. James Travis officiated. Online condolences can be directed to www.meyerbroschapels.com.

Chris was born on March 26, 1996, in Sioux City, the son of Scott and Lila Baker. He attended Hawthorne Elementary, Leeds Elementary, and North Middle School.  He graduated from North High School in 2014. He moved on to achieve his associate degree at Western Iowa Tech Community College.

He then moved to Jones Street with a few friends, where they made many memories to last a lifetime.

Shortly afterwards, Chris moved to Kingsley, where he worked at Blue Bunny for a few years until he recently got a job in construction, a career path that Chris had always wanted to go into.

If you knew Chris, he was a handyman and found peace in building many things like his bench and a chicken coop for his six beautiful ladies: Huey, Dewe, Luey, Chicken Little, Shepard, and Denis the Menace. Chris always enjoyed adventurous outdoor activities like skateboarding at a young age to moving on to snowboarding as he got older, fishing, boating, and hiking. Most nights he could be found sitting around the fire with friends, cracking jokes and enjoying a Busch Light.

Chris left behind his grandpa, Fred; his mom, Lila; brother, Karl; his sister, Mary; his nephew, Jaxson, or as Chris always called him “Bubba”; his two best friends, Benny and Doc; and his very special friend, Madi.

He was preceded in death by his dad and his grandma.

Chris will always be remembered for his courage during difficult times, and he wanted everyone to remember: “Don’t forget to smile.”