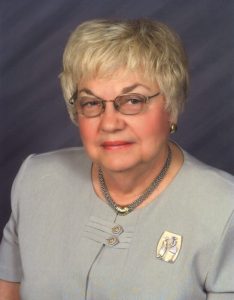 Joan L. Ludvigson, age 87, of Holstein, formerly of Cushing, passed away on Friday, May 22, 2020 at the AbiliT Senior Living Center of Holstein.

A funeral service was held on Tuesday, May 26, 2020 at 10:30 AM at the St. John Lutheran Church of Cushing with Rev. Tami Groth officiating. Burial was held at the Cushing Cemetery of Cushing.

Joan Lois (Ehlert) Ludvigson was born on April 21, 1933 to Dorothy (Mohr) Ehlert and William Ehlert in rural Ida County.  She was baptized on June 4, 1933 at St. Paul Lutheran Church in Holstein, Iowa.

She moved with her family to a farm south of Cushing on March 30, 1947.  She started school in a one room rural school north of Holstein and continued her education at Cushing Consolidated School, graduating in 1951.

She was employed at a doctor’s office in Storm Lake, Iowa for a year before entering Lutheran School of Nursing in Sioux City, Iowa.  Due to a previous leg injury she was unable to finish and came home to live and nurse her ailing grandmother.  She worked for a brief time as a secretary at Cushing Consolidated School.

The family lived on farms south of Cushing and then moved to her family farm in August of 1969.  The couple retired in 1994 and moved to Holstein.  Lars passed away in December of 1999 and Joan lived out her life in Holstein.

Joan was very active in her church, having served as choir director for 20+ years, taught Sunday school, Bible school and held various offices in the organizations of the church.

She was active for many years in the Republican Party and served as Ida County Chairwoman.  She served on three boards at Horn Memorial Hospital in Ida Grove; the TLC, The Foundation and the Board of Directors.

She was a member of the Ida County 4-H Committee and was active in the American Simmental Association receiving the Christensen Elite Award.

She also belonged to the American Red Angus Association receiving the Personality of the Year Award in 2010 and the family received the “Breeder of the Year” award in 2011.

She was an active member of the Roger Baumann Legion Auxiliary in Cushing.  The Governor of Iowa appointed her to the District Judicial Nomination Commission 3-8 and to the Chemically Exposed Infants and Children’s Council and she served on both.  She loved to travel and was able to visit most of the United States as well as Canada, Europe and South America.