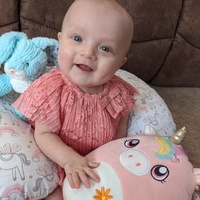 Karlee Marie Simonsen, 9 months, passed away Saturday, May 16, 2020 surrounded by her family.
Funeral Services were held 10:30am Thursday, May 21, 2020 at Waterbury Funeral Service of Sioux City.
Karlee was born on July 17th, 2019 at 11:53am at St Luke’s Hospital in Sioux City, Iowa. At 7 1/2 weeks old Karlee was flown down to Children’s Hospital in Omaha where she was diagnosed with Acute Lymphoblastic Leukemia.
Karlee soared through the Induction phase of chemo, continuing to eat, smile and play. At the end of induction Karlee was severely septic. She was placed in Pediatric Intensive Care Unit for 2 weeks and intubated for one of those weeks. During this time Karlee showed us what a strong and resilient little girl she truly was.
While in PICU, a bone marrow biopsy was done and we were able to celebrate her being in remission.
Karlee went onto the next phase, consolidation. Karlee was again going through chemo not batting an eye; smiling, playing, meeting milestones that an “average” baby should be meeting. Karlee was doing so well with chemo we were able to go home for the first time since diagnosis, 75 days prior.
We were home for Thanksgiving and couldn’t have been more thrilled. We returned to Children’s right after Thanksgiving and started chemo again. Unfortunately, during this time Karlee wasn’t making counts for chemo. We were able to go home for Christmas even though her counts were extremely low, but once we returned they did further blood work, and we learned Karlee had relapsed.
From here, Karlee’s journey began at University of Nebraska Medicine. We met with the doctors to discuss the best treatment options for Karlee, and all agreed on CAR-T cell therapy. At the beginning of February we traveled down to UNMC for her T-cells to be collected, so they could be sent off to be modified.
During this time Karlee’s cancer had made itself known, therefore we were admitted again to start her on chemo. Then, we were able to go home until March 6th, when we were admitted again to begin the chemo that would prepare her body for the CAR-T cells.  Her modified t-cells were infused on March 13th. Karlee had many side effects from the new therapy: fevers, rash, and a seizure that caused her to be intubated yet again. However, we were able to allow Karlee to breathe on her own a few days later.
Karlee continued to get better and we were discharged on April 10th, just in time to celebrate her first Easter at home.
While at home we enjoyed every minute of it, Karlee was full of smiles and loved watching Blake and Kaelynn play. We returned to UNMC April 22nd for a bone marrow biopsy to see if Karlee was in remission, later that evening we got the fantastic news that she was indeed in remission.
We continued to enjoy our time at home with all of us under the same roof. We returned to UNMC on May 4th for a routine follow up appointment to learn that Karlee had relapsed again.
We made the decision to start treatment for a bone marrow transplant. Karlee had two chemo treatments but it was not working for her. On May 13th we decided Karlee would be switched to supportive care.
Karlee loved being around Blake and Kaelynn. She loved their energy, the attention from them and their playfulness with her. Kaelynn was a mother hen, she was constantly making sure Karlee had a pacifier, blankets and toys. Blake could just look at Karlee and she would be full of smiles and giggles. She has brought so much joy and happiness to everyone that has known Karlee. Her bravery, strength, and resilience has touched so many people in her short 9 months of life.
Posted in Obituaries