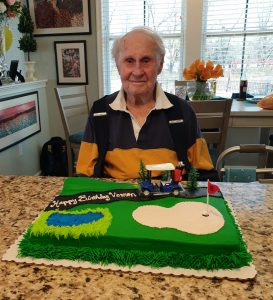 There will no services or visitation at this time.

A memorial service is planned for a future date in Kingsley with burial of his cremated remains in the Kingsley Cemetery.  Online condolences may be given at www.DayDeremiahFrye.com and www.rohdefh.com.

Vernon was born February 10, 1920 in Kingsley, Iowa.  Vernon, the youngest of five children, was the son of John and Violet (Toothman) Grubb. He was self-employed as a farmer, near Kingsley.

Vernon served in the U.S. Air Force during World War II.  While stationed at a small airbase outside Abingdon, England, he met his wife Nancy in a pub called the Grapes.  Nancy was a member of the British Royal Air Force stationed on the other side of Abingdon.

After his discharge from the Air Force, he joined the American Legion and the Eighth Air Force Historical Society and was a life-long member of both organizations.  He was also a member of the First Congregational Church in Kingsley, Iowa.

Vernon and Nancy started their life together with nothing.  He worked in the packing plant in Sioux City and they lived with his parents until they had enough money to start farming.  They farmed the Don Wormley farm in Union Township, until buying and moving to the Bainbridge farm across the road.

The Century Farms Program recognizes and honors those individuals whose families have owned the farmland for 100 years or more. The program began in 1976 as part of the Iowa Bicentennial Celebration.  The program is sponsored by the Iowa Department of Agriculture and the Iowa Farm Bureau Federation, with the endorsement of the Iowa American Revolution Bicentennial Commission.

Vernon loved to play golf.  He was a founding member of the Brookside Golf Course, Kingsley, Iowa.  The following are some golf memories:
• Vernon got his sons, Michael, and Rick, started in golf at the original Kingsley course that had sand greens.
• Vernon used to team up for golf with Phil Krieg for many years. They were a formidable pair in the Kingsley league. People used to joke with him about being a lefty until he would sink key putts.
• He was a good steady golfer and it took Rick many years before he could beat him.  Mike never did.
• Vernon and Nancy used to play golf every week with the Coral Sands group when they were in Apache Junction, every winter for years.
• In 2004 Vernon and Nancy went to three pro tournaments in two months: the Phoenix Open (as it used to be called), the Honda Classic and the Bay Hill Tournament.
• Vernon and Rick played the Scottsdale TPC, where they play the Phoenix Open, now the Waste Management Phoenix Open.
• As he got older, he would get with a number of the retired folks around town and play a round, they would just meet at the course and select teams, Rick said that he was honored to be able to play with them occasionally.
• Vernon played a lot of golf in Iowa and Arizona, but he also played in Minnesota, Michigan, Pennsylvania, and Maryland to name just a few states.
• Rick remembers when they played a golf course in Michigan and just when they got to the farthest point from the club house, it rained hard for 3 holes.  Although soaking wet, they stayed out on the course and the sun came out.  They dried off and enjoyed the rest of the round.

When Vernon was young, he attended the single-room school near the family farm, and he used to trap gophers for their pelts before school. He said his Dad would yell at him to get to school.

Vernon farmed all his life and had good years and tough years (during droughts in the 50s).  Mike and Rick remember going with him to the Dakotas for hay.  Even though there were tough years, Vernon took the family on trips each year — maybe not always far, but they always took a trip: Long Island, D.C., Minnesota, Black Hills, Oregon to name a few. Vernon took Nancy to Disney World the year it opened the Magic Kingdom, in 1971.

Vernon was a farmer, a mechanic, an electrician, a pipe fitter, a catcher, and so forth. His boys thought he could do anything.  He was a great Dad and an even better friend.

Vernon was preceded in death by his parents; his wife, Nancy (Bird) Grubb in August 2014; two sisters, Inez Preston, and Verna Jaacks; one brother, Russell Grubb; and one grandson, Richard Adrian Grubb.