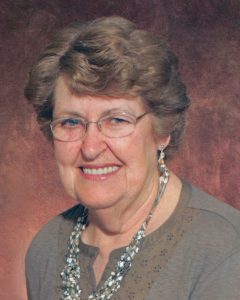 Long-time Spearville, Kansas resident Bernice Lea Groth, 79, died May 22, 2020 at Wesley Medical Center in Wichita.  She was born on the family farm on August 22, 1940 in Woodbury County, Iowa, the daughter of Harvey Lyle and Bernice Louise (Bush) Robinson.

A private funeral Mass will be held at St. John the Baptist Catholic Church in Spearville on Saturday, May 30, 2020 with Rev. John Forkuoh and Rev. Robert Schremmer presiding. Burial will be at St. John’s Cemetery in Spearville.

The family encourages those who knew and loved Bernice Lea to share their thoughts and memories in the online guest book at www.swaimfuneralhome.com.

She met her future husband, John, through their 4H activities. She graduated with the class of 1958 and then completed studies from the School of Cosmetology in Sioux City, Iowa.
She married her high-school sweetheart, John, on April 30, 1960 at the Immaculate Conception Catholic Church in Moville, Iowa. They recently celebrated their 60th wedding anniversary.

She held a variety of jobs in her life. She was Dorm Mother of the women’s dormitory at the University of Northern Iowa. She worked at Spearville District Hospital for several years as the housekeeper.

In semi-retirement she remained active, cleaning the church, the public library, and private residences.  But the “job” foremost in her life was caring for her three sons and her husband, John, whom she cared for with devotion, especially these last years. She loved her children, John, her grandchildren, garage sales, visits with friends, and the color red—not necessarily in that order.

Her love for her family and friends had no bounds. There was always an extra place at the table. She could prepare a meal for five or thirty-five from the contents of her cupboards or her freezer, from which a chocolate cake or loaf of banana bread could magically appear for dessert.

She was so attentive to guests that she seldom sat. She was known for her thoughtfulness, her generosity, and devotion to her family and friends. She loved to laugh but always had a quiet dignity. She had a heart as big as Kansas.

Bernice Lea gave generously of her time and talents to her community.  She was a member of St. John the Baptist Catholic Church, the Daughters of Isabella, TACKY (The Active Citizen Keeps Young), and served as president several times for the Minerva study club, a group she greatly enjoyed.

She has surely been welcomed by God. “Well done, thou good and faithful servant. Well done.”