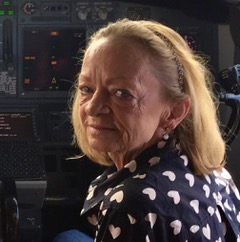 Jan Elizabeth Seay, 69, of Aubrey, Texas, the former Jan Funk of Moville, Iowa, passed away May 13, 2020 after falling ill, with her son by her side.

A longtime resident of Anchorage, Alaska, Jan was born to the late Winfred and Darlene Funk Niles on October 30, 1950 in Sioux City, Iowa.

Jan graduated from Woodbury Central High School in 1968. She went on to receive her BS in Sociology from California State University Fullerton in 1977. She then received her MS in Library Science from The University of Southern California in 1980.

Jan joined the United States Air Force following her High School graduation in 1968. She was stationed with Strategic Air Command, Offutt Air Force Base, earning an Honorable Discharge a few years later. She received the rank of Airman 1C.

After her discharge on January 7, 1970 she moved to Southern California to begin her life with her first husband, and soon a son, AJ.

Never a person to back away from a challenge, Jan worked a full time job while putting herself through school all while raising her son.

In 1981 her contract with Fluor would expire and she returned to the lower 48. Although she was happy being closer to home, her heart would always belong to Alaska. In 1983 she would move back to Alaska and that’s where she would call home for the next 24 years.

Moving back to Anchorage in 1983 she reconnected with Del. Their relationship would blossom to an eventual marriage on October 12, 1989. Over the course of her years back in Alaska she would continue to work in records management for British Petroleum (BP), The State of Alaska and Cook Inlet Region, Incorporated (CIRI). She also worked as a librarian at the Z.J. Loussac library. In 2007 Jan and Del retired to Pahrump, Nevada where they would stay until Del’s passing in April 2019.

Jan loved reading books and painting. She had a talent for painting landscapes as well as the art of calligraphy which she learned from her father. She could also spend hours listening to classical music or her favorite, Neil Diamond.

She always put others before herself. Her life was one of independence and self sacrifice. She took so much pride in raising her son as a single mom and taking care of her husband in declining health later in life. She sat through Little League games, flew terrified in little airplanes and fished in the rain with her husband. She did it just because she knew it made them happy.

She would also never admit it but she loved being mistaken for the actress Goldie Hawn in her youth — sending people away unhappy after they asked for an autograph.

Jan always wanted her son to follow in her younger brother’s path as a successful accountant. What she got in return was an airline pilot. She suffered through little airplanes rides around Anchorage and Daytona Beach, Florida.

She would say she loved it but we all know she was scared to death. It would be her son’s honor though the years to fly her as an airline pilot. Her favorite trip was to Kona, Hawaii for her 67th birthday in 2017, her son as the Captain.

Jan is survived by her son AJ and her granddaughter Elizabeth; her stepdaughter Samantha and her son Rob (Kendra); and brothers and sister Steve (Twila) Funk, Greg (Connie) Funk, Ellen (Terry) Mitchell and Timm (Jean) Funk.  She was preceded in death by her late husband Del; her parents, Winfred and Darlene Funk Niles; and three favorite little friends: Bob, Tonka and Wylie.