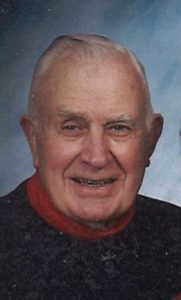 A Celebration of Life service will be held on Saturday, June 13, 2020 at 1:30 p.m. at Grace United Methodist Church of Correctionville while social distancing.

Robert was born June 27, 1930 in Pisgah, Iowa to Fay L. and Kathryn J. (Steffe) Wiltse, graduting in 1947.  He immediately entered into professional baseball, signing a New York Yankee baseball contract as a left-handed pitcher.  He remained in baseball until 1955, including a tour with the U.S. Army during the Korean War.  He graduated from Morningside College in the spring of 1959 and came to Correctionville as a classroom teacher and high school coach.

He spent 30 years in teaching, retiring from the school in 1988.  Deciding to continue working, he took a sales job in Onawa, Iowa with the Hutchinson Chev-Olds agency and remained there until 1996, retiring in February.  The remaining years were spent doing woodworking, boating and spending much time in the Iowa Great Lakes.

His favorite activities were ballroom dancing to Big Band music, cruising, wintering in Florida, and spending time with family, especially the grandchildren and great-grandchildren.

Robert was a 60-year member of the Masonic Lodge, Sioux City Consistory of Sioux City and the Abu Bekr Shrine.  He also was a member of the American Legion, Order of Eastern Star, the Professional Baseball Players of America, and Grace United Methodist Church of Correctionville.

Robert married Bonnie Ruffcorn of Mondamin, Iowa in October 1954.  This past fall they celebrated 65 years of marriage.

He was preceded in death by his son, Robert Fay Wiltse, JR; his parents; his sister, Carol Ploeger; and his grandparents.