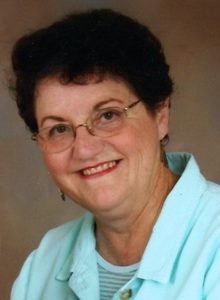 A funeral Mass will be held on Saturday, June 27, 2020 at 10:30 a.m. at the Immaculate Conception Church of Moville with Msgr. R. Mark Duchaine officiating.  Burial will be at Arlington Cemetery of Moville.

A visitation will be Friday, June 26, 2020 from 4:00 p.m. – 8:00 p.m. with a scriptural prayer service at 8:00 p.m. at Nicklas D. Jensen Funeral Home of Moville. Immaculate Conception Church will require all attendees of the funeral Mass to wear a mask and follow social distancing.

Charlene Kay Grell was born on December 4, 1946 in Danbury, Iowa to Gilbert F. and Ruby (Bottger) Uhl.  She was a graduate of Danbury Catholic High School, then earned her R.N. from St. Vincent School of Nursing.

Charlene was united in marriage to Arnold “Butch” Grell Jr. on October 26, 1968 in Danbury.  To this union three children were born.

Charlene worked as a nurse for more than 50 years.  She was employed at Synergy Home Care since 2009. She previously worked at Hospice of Siouxland for 16 years, Sunrise Manor, Crawford County Public Health and the Hartley Memorial Hospital in Battle Creek, Iowa.

She was a member of the Immaculate Conception Church, where she served as secretary of the Ladies Guild and belonged to the Rosary Ladies.

Charlene loved music and spent many hours listening to her hundreds of CD’s.  She also loved writing; she wrote in journals, letters and many personal cards and notes to anyone she thought needed it.

She and Butch enjoyed camping.  Charlene lived her life by the motto, “Faith, family and friends.”  Her favorite saying that she repeated often was “Trust in God and live one day at a time.”

She was friendly and approachable to anyone and everyone.  No one was a stranger, just a person she hadn’t spoken to yet — but give her a couple of minutes and that would change!

Charlene was preceded in death by her parents, Gilbert and Ruby Uhl; a grandson, Riley Grell; and a brother, Marvin Uhl.