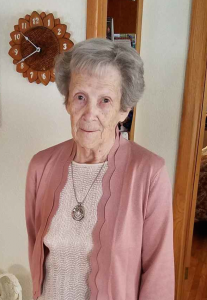 A private family service is planned for Thursday, June 25, 2020 at Grace Lutheran Church in Correctionville with Pastor John Reibhoff officiating.

Marjorie “Tooty” Darlene Jepsen was born on April 4, 1930 in Cherokee Iowa. She  was united in marriage to Marvin Jepsen on February 15, 1948 at Memorial Presbyterian Church in Cherokee. Following their marriage they began farming near Cushing and later relocated to a farm south of Correctionville.

Along with being a hardworking farm wife, Tooty worked miscellaneous jobs outside of the home. Tooty was a spirited individual who enjoyed gardening, baking, camping and fishing.  A pair of skates and skate key was an essential part of her teenage years. Tooty was a proud Christian and active member of Grace Lutheran Church in Correctionville.

Above all, family was most important her. Tooty was a beloved wife, respected mother, grandmother, and friend. She thoroughly enjoyed spending time with her grandchildren and great grandchildren.  Additionally she cherished her Yorkie, Abby.

Tooty was preceded in death by her husband, Marvin, her son, Marvin Jr., her grandsons, Rodney and Ryan Robson; and her daughter-in-law, Lori Jepsen.

In lieu of flowers, all received memorials will be directed to Grace Lutheran Church in Correctionville, Iowa.