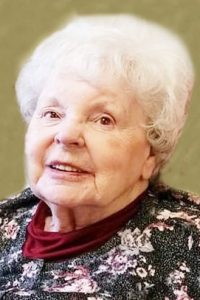 In accordance with Mary’s wishes, a private family memorial Mass was held at Immaculate Conception Catholic Church of the Mater Dei Parish in Sioux City, with Rev. Daniel Rupp officiating. Her ashes were buried next to her husband, Bob, in Fairview Cemetery in Albaton, Iowa.

Arrangements were under the direction of Morningside Chapel, Christy-Smith Funeral Homes. Online condolences may be made to the family at www.christysmith.com.

Mary was born on Sept. 29, 1933 in Le Mars, Iowa to Donald and Helen (Keitges) Dugan. She grew up in Cherokee, Iowa and graduated from Immaculate Conception Catholic High School in Cherokee. She attended college at Creighton University, Wayne State College, and the University of California Los Angeles (UCLA).

Her teaching career began in Bennington, Nebraska and she taught in several other cities including Omaha; Long Beach, California; Cherokee; and York, Nebraska. She taught in Sioux City at Joy Elementary for the final 25 years of her career.

She was an active member of Immaculate Conception Catholic Church of the Mater Dei Parish until her health no longer allowed her to be.

Mary was preceded in death by her parents; her husband, Robert “Bob” Gerking; and her sister, Dottie.