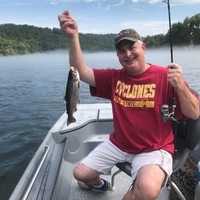 Robert was born July 24, 1964 in Sioux City, Iowa, the son of Robert A. and Julie Klingensmith Davis. Robert was of the Christian faith. He worked as Senior Director of Procurement for Tyson Foods.

He enjoyed playing golf, trout fishing, and most of all, spending time with his family and friends. Robert was preceded in death by one brother, Justin James Davis.