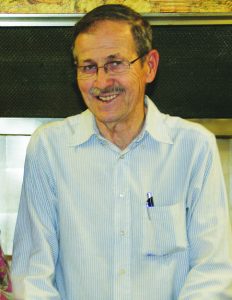 Private services will be held at the Kingsley cemetery, July 8, 2020.  Condolences may be directed to the family at www.rohdefh.com.

Never wanting to stay still, Ed mowed lawns to earn money, worked at the Walker’s ice cream shop on Pierce St by Central High School, and by the age of 15 was a bellhop at the Martin Hotel.  The Martin hotel is where he met many celebrities, — including Jack Dempsey, Gene Autry, and Gorgeous George, a wrestler of the time — and served railroad conductors, engineers, circus people and the Ice Capades skaters.

Working at the Martin became one of the biggest turning points in his life.  He loved to tell the story of working with a lady that was a night desk manager at the hotel — but more importantly, met the daughter of that lady, whom he fell hard for but she would not give him the time of day.

Eventually he entered the Marines and was stationed in San Diego, California for several months but discharged honorably within the year.  Moving back to Sioux City and back to the Martin Hotel, that girl that he fell hard for suddenly noticed him and had missed him.  She accepted his invitations for dates, and he proposed to Carol Sue Jackson with plans to marry soon.

That marriage happened on April 1, 1955 in Pipestone, Minnesota as Ed was 19 and Sue only 17.  They started their family right away, and eventually had five children: Edward Allan, Shelley Sue, Kelly Grace, Cynthia Denise, and Nanciann Melinda.

Ed moved from the bellman position at the Martin, to take on the position of bellman at the Warrior Hotel.  He had many opportunities to meet even more celebrities there: Elvis Presley, Liberace, Louis Armstrong (Satchmo), Richard Widmark, presidential candidates, and governors.  He was proud to take home the $200 per week to his growing family, which was considered a decent living.  He moved to a night clerk position and then decided to leave the Warrior right after it was taken over by the Sheraton.

Ed drove taxi and worked for a contractor, digging ditches by hand until his Dad purchased a gas station to run with his son Ed, naming it Holdcroft’s Phillips 66 in Moville, Iowa along Hwy. 20.  Neither of their dream jobs, Waldo sold it and moved on to work at the West Fork Sand and Gravel Pit.  Ed eventually left that job to work 10 years for the Woodbury County REC, leaving there when Ed & Sue got the opportunity to purchase Campbell’s café in Kingsley.

After a positive family vote, they moved to Kingsley where they owned and operated Ed’s Café for 43 years.  They met new friends and customers that became thought of as family, whom they cherished for many years.

Ed and Sue served their community in many ways through the years — serving on the Ambulance Crew, Ed served on the Plymouth County Convention Board for 10 years, 2 years on the Board of Midway Park, Ed was a Cub Scout Leader with Sue’s help, and many other fundraising and charity activities.

Passing before them are their parents, a daughter Kelly; a grandson, Lane, a great-granddaughter, Sarah, and a pre-term grandchild.