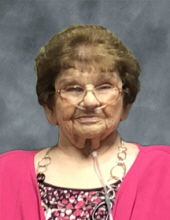 Leona I. Schmidt, age 82, of Danbury, Iowa, passed away on Tuesday, June 30, 2020, at the Willow Dale Wellness Village of Battle Creek, Iowa.

Leona Ida Schmidt, the daughter of Henry and Ida (Hesse) Kollbaum, was born on August 16, 1937. She grew up in the Ida Grove and Anthon areas and attended country school. When her schooling was complete she helped on the family farm.

On July 17, 1953, Leona married Norman W. Schmidt in Anthon. To this union four sons were born: David, Brian, Russell and Scott. Leona was a loving and devoted wife and mother. Besides raising her sons, she also worked at local restaurants as a cook, the mink ranch in Anthon, and babysat. Leona was a “mom” to all the kids on the block.

Leona could be found tending to her large garden and canning her produce.

She enjoyed a competitive game of cards, putting puzzles together, playing bingo, and collecting angels. She always had a pot of coffee on for her family and friends that would stop to visit. Leona like to bake and cook for her family and looked forward to the annual Kollbaum family picnic. She will be dearly missed by all who knew & loved her.

She was preceded in death by her parents, Henry and Ida Kollbaum; sisters Ruth (Bill) Malone, Delores Diamond and Darlene (Ronnie) Zimmerman; and a brother Henry Kollbaum.