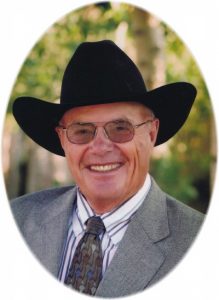 Roger B. Chinn, 78, Grassy Butte, died Thursday evening, June 25, 2020 from injuries sustained in an ATV accident on the ranch while spraying. A Celebration of Life Service for Roger will be at 10 a.m., Wednesday, July 1, 2020 at the Grassy Butte Park, with Rev. Roy Chrisman officiating.

Roger Chinn was born in Woodbury County, Iowa on October 13, 1941, son of Bernard Chinn and Wilma (Culler) Chinn. He was the 2nd of 4 children. He graduated from Pierson High School, Pierson, Iowa in 1959. After graduation he farmed with his father and then went on to establish and manage a feedlot in the area.

Roger married Gail Jean Klingensmith in Grand Meadow, Iowa on January 14, 1962. They had two children, the first, Tamara Lee was born in 1964, followed by their son, Bradly Roger in 1967.

In 1968, Roger saw an opportunity and moved his family to a ranch south of Grassy Butte. Here the Chinn family loved, laughed, and as with most families argued at times, all the while thriving in western North Dakota. The ranch has been the Chinn home for over 52 years and will continue with son Brad at the reins. This is not to say that Roger didn’t have a few “suggestions” for Brad over the past few years.

Roger spent many years representing not only Grassy Butte and North Dakota but on a national level with the Western Interstate Region (WIR) National Association of Counties and was awarded the Dale Sowards Award from the WIR for outstanding service to public land counties at the local, state, and national level.

Roger and Gail loved to travel whether it was pulling their RV up the Alaskan Highway not once but twice, floating down the Rio Grande, New Mexico and Niobrara River in Nebraska, visiting Hawaii, or wintering in New Mexico with their many friends in Elephant Butte.

Roger looked forward to hunting season and loved to go fishing whenever he could. Two of the most recent trips were to Canada bear hunting and Alaska moose hunting with his son, grandsons and friends. Since his retirement, he had found his niche in gardening, and loved to explain to Gail how to garden the right way.

Roger is survived by his loving wife Gail of 58 years, his daughter Tami Chrisman (Roy) of Sergeant Bluff, Iowa, and his son Brad Chinn (Jodi) of Grassy Butte; 10 grandchildren – Janice, Bobby, Lauren, Trace and Tori; and Tel, Kelli, Konner, Katelin, and Dale; along with 5 great-grandchildren.

Roger loved and lived the land. He loved his family and died doing what he loved, working on the ranch. He was a knowledgeable human being who was a mentor to those that wanted to listen, and never stopped learning and sharing with others. His knowledge and love will live on with so many that he touched.

The family has requested that in lieu of flowers or donations, make a donation in Roger’s name to the agriculture related charity of your choice.

To view a livestream of the service please copy and paste the link below into your internet browser.
https://iframe.dacast.com/b/156599/c/536611