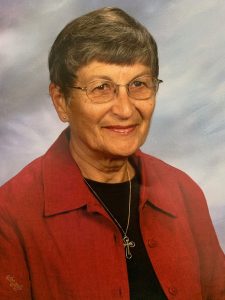 Eunice Clause, age 86, of Anthon, Iowa, passed away on Wednesday, May 6, 2020, at the MercyOne Siouxland Regional Medical Center of Sioux City, Iowa.

A Memorial Service will be held at 10:30 a.m. Friday, July 17, 2020, at the United Methodist Church of Anthon, Iowa. Lay Pastor Shirley Nelson will officiate.

The Armstrong – Van Houten Funeral Home of Anthon, Iowa, is in charge of the funeral arrangements. Condolences may be sent to www.armstrongfuneral.com.

Eunice Jeannette Clause, the daughter of Lyle and Lola (Yockey) Hill, was born on November 28, 1933, in Sioux City, Iowa. She grew up in Anthon, Iowa and received her education at Anthon High School graduating with the class of 1951.

Eunice married Marvin Shever. To this union two sons were born, Rick and Kent. Eunice and Marvin would later part ways. On November 13, 1962, Eunice was united in marriage to Marvin Clause.

Eunice was a member of the United Methodist Church of Anthon and a former Worthy Matron of the Order of the Eastern Star. She enjoyed baking, knitting, sewing, gardening, going for walks and time with her pets.

Eunice liked staying in contact with family and looked forward to their reunions. She will be dearly missed by those who knew and loved her.

She was preceded in death by her husband, Marvin Clause; her parents, Lyle and Lola Hill; and her brother, Kenneth Hill.