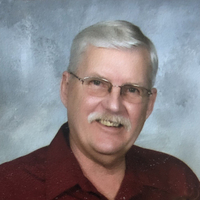 Steve was born the son of Victor and Dorathy (Hanson) Nelson on December 19, 1952 in Anthon, Iowa.  He graduated from Anthon-Oto High School and attended a plumbing apprenticeship.

Steve worked for Foulk Brothers Plumbing for 45 years, first out on the job sites, then in the office as an estimator.  He was very dedicated to his work and enjoyed the relationships he made throughout the years.

He served for many years on the South Sioux City Plumbing Board.

He always took advantage of a great day of golf, or a chance of a game of cards. Visiting with family and friends was a joy to him.

He was the first to volunteer to help anyone who needed help with anything at any time, day or night.

Steve is survived by his wife, Rebecca Nelson of South Sioux City; his daughter, Jaime Woodard of Sioux City; his brother, Roger (Shirley) Nelson of Anthon; his uncle, Tom Hansen of Kansas; his grandchildren: Mandy, Marsha, Peyton, Isaiah, Victoria, Jessica, and Brenden; his great-grandchildren, Jaelyn and Piper; and his son-in-law, Jeremy Kleinschmidt of Sioux City.

He was preceded in death by his parents; his daughter, Dawnyel Kleinschmidt; his sisters, Gaylene in infancy and LaDonna Greenfield; his brother-in-law, Curt Greenfield; and his son-in-law, Erron Woodard.

In lieu of flowers, memorials may be made to Wounded Warrior Project or Children’s Hospital of Omaha.