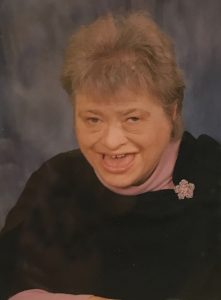 A Mass of Christian Burial was held at 11:00 a.m. Monday, July 27, 2020, at the St. Joseph Catholic Church of Anthon, Iowa. Msgr. Mark Duchaine officiated. Committal Services followed in the Mount St. Joseph Catholic Cemetery of Anthon.  The Armstrong – Van Houten Funeral Home of Anthon, Iowa is in charge of the funeral arrangements. Condolences may be sent to www.armstrongfuneral.com.

Debra Ann Dixon, the daughter of Francis P. and Edna M. (Koehler) Dixon, was born on December 11, 1958, in Sioux City, Iowa. She grew up in Anthon, Iowa until 1979. At that point she moved to Sheldon, Iowa, where she became a resident of Village Northwest Unlimited.

While residing at Village Northwest Debra held various jobs. She loved to go out for lunch and go shopping, especially for new shoes and purses. Debra enjoyed taking walks and treasured the times when her family came to visit.

She was a fun loving person who had a humorous side and loved to joke around with people.

Debra will be remembered as a cheerful individual with a sunny disposition. She will be dearly missed by all those who knew and loved her.

She is also survived by sister-in-law Vicki Dixon of LeMars, IA; the staff and residents of Village Northwest Unlimited; as well as numerous nieces, nephews, extended family and friends.

She was preceded in death by her parents Francis and Edna Dixon; and her brother Don Dixon.

In lieu of flowers, memorials in Debra’s name may be directed to Village Northwest Unlimited, 330 Village Circle, Sheldon, IA 51201.