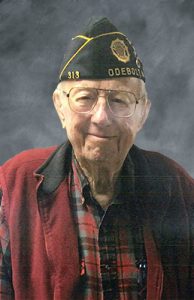 Memorial Services will be held at a later date. The Christensen – Van Houten Funeral Home of Odebolt, Iowa, is in charge of the funeral arrangements. Condolences may be sent online at www.christensenvanhouten.com

Leslie P. “Les” Friedrichsen, the son of Fred and Amanda (Petersen) Friedrichsen, was born May 30, 1924, on the farm near Schleswig, Iowa. He attended country school and graduated from Schleswig High School with the class of 1942. In March of 1944, Les enlisted into the U.S. Navy. He graduated from the Navy V-5 Flight Training program and was commissioned an Ensign to Pilot in June 1946. His tour included a voyage around the world on the USS Valley Forge. Upon his honorable discharge in September of 1948 and he returned home to Sac County.

On August 15, 1946, Les was united in marriage to Ruth Brown in the Friedens Evangelical and Reformed Church of Schleswig, IA. The couple resided in the Sac County area and were blessed with three sons Gerald, Bruce, and William. The family farmed in the Sac and Ida County areas for eight years before Les accepted a position as Fieldman for  Farm Bureau for four counties in western Iowa. In November 1967, he was promoted to Farm Records Director for the Farm Bureau Federation in several Midwestern states and served in that position until his retirement in June of 1989.

Les and his wife were privileged to spend many of their retirement winters in Mesa, AZ, which they thoroughly enjoyed. They also traveled extensively, both in the USA and overseas. Les loved his family, tending to his flowers and playing golf. He had many other interests and was very knowledgeable that he was never bored a minute during his whole life. Les was an active member of the Methodist church, the Roose Post No. 313 of the American Legion of Odebolt, Iowa and the Sac County Farm Bureau.

When Ruth required full-time professional health care, Les moved into her nursing care facility and spent the last ten years of her life with her every day, giving her love and support.

He was preceded in death by his parents Fred and Amanda Friedrichsen; and wife Ruth Friedrichsen (2018) and his sisters Ruth and Marjorie.