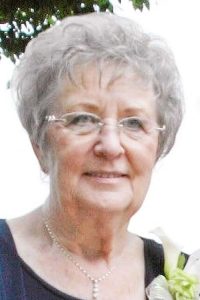 Dorothy Barto, 87, of Sioux City, formerly of Moville, was called home to heaven on Thursday, August 13, 2020, surrounded by her loved ones.

Services were held at 11 a.m. Saturday, August 15 at Meyer Brothers Morningside Chapel. Burial was in Arlington Township Cemetery Moville. Online condolences may be made to www.meyerbroschapels.com.

Dorothy was born on Sept. 8, 1932, in Climbing Hill, Iowa, to Jasper Andrew and Alice (Beanblossom) Lohse.

On June 29, 1952, Dorothy was united in marriage to Wayne Barto in Moville. She worked as a surgical tech with a Sioux City neurosurgeon for 13 years. Dorothy was very entrepreneurial, and for more than 40 years, she owned and managed a successful business with Shaklee. She was recognized for Shaklee’s President’s Club due to her outstanding sales and services.

Dorothy loved collecting antiques. She enjoyed flower gardening and landscaping, passing that obsession on to her daughters. She greatly enjoyed annual treks to Estes Park in the Rocky Mountains for family vacations.

Dorothy will be remembered for her generosity, patience and kindness as well as her contagious, uncontrollable laughter. Family was central to Wayne and Dorothy’s lives. They enjoyed frequently participating in family fun.

Those left to honor her memory include a son and his wife, Dennis and Julie Barto; a daughter, Linda Kourpias, all of Sioux City; a son and his wife, Scott and Shelly Barto of Sergeant Bluff; a daughter and her husband, Arleen and Clark Lucart; a daughter and her husband, Dr. Eileen Barto and Doyle Sailors, all of Sioux City; 10 grandchildren: Jayna (Matt) Doering, David (Sara) Barto, Lindsey (Justin) Holmes, Jess (Chuck) Gordon, Christina Lang, Rachel and Elizabeth Barto, Clark (Lacey) Lucart Jr., Andy (Emily) Alexander and Taurice (Justin) Lounsbury; 19 great-grandchildren; and her beloved dog, Buttons.

She was preceded in death by her parents; her husband, Wayne; her grandchildren, Sarah Alexander and Thomas Kourpias; and her siblings, Mary Malcolm, George “Bud” Lohse, Wanda (Potter) Collette and Harold “Hap” Lohse.