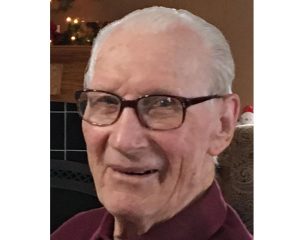 Cremation rites will be accorded and no services are planned. Meyer Brothers Morningside Chapel is in charge of arrangements.

Bob was born on Nov. 3, 1922 in Cushing, Iowa, to Florence (Krager) and Dick Bernhardt. He graduated from Correctionville High School.

He enlisted in the U.S. Army Air Corps on Jan. 19, 1942, during World War II. Bob spent three years overseas in the Asian, African, and European theaters of war. He was discharged Sept. 5, 1945, as a Staff Sergeant.

He married Betty Knight on September 21, 1945 in Sioux City. They had three sons, Terry and the twins, Brad and Brian, who shared his birthday. He worked for Swift and Company and Coca-Cola in sales. He worked for Wonder Bread for 32 years as a route salesman.

After his retirement, he worked in real estate and then drove a bus for Arrow Stagelines in Sioux City and in Phoenix, Arizona. Bob and Betty were members of the Elks Lodge.

He loved watching sports, especially golf. He closely followed the Iowa Hawkeyes and Iowa State teams. He enjoyed family vacations at Lake Okoboji and Spirit Lake. He and Betty spent 25 years at their cabin at Miner’s Bend on the Missouri River.

He enjoyed time with family in his later years at Storm Lake. Every year, on Nov. 3, family and friends gathered to celebrate Bob, Brad and Brian’s shared birthdays.

He is survived by his sons, Terry of McCook Lake, S.D.; Brad and his girlfriend Chris of Sioux City; and Brian and his wife Debbie of Goodyear, Arizona; his brother-in-law, Ron Knight of Los Angeles, California; his sister-in-law, Arlene Bernhardt of Dakota Dunes; four grandchildren: Chad Bernhardt, Paige Scott, Lindsey McGinty and Jeff Bernhardt; six great-grandchildren; and a special niece, Diane Heliker.

He was preceded in death by his wife, Betty; his parents; his two brothers, LaVere and Roger; and his daughter-in-law, Bonnie (Helm) Bernhardt.

Bob’s family would like to express their sincere gratitude to the staff at Countryside and Hospice of Siouxland for their wonderful care they provided to our Dad.