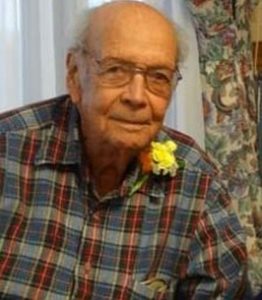 Funeral services will take place at 10:30 a.m. on Tuesday, August 25, 2020 at the New Life Baptist Church in Kingsley. Pastor Ken Kraft will officiate. Burial will follow at the Kingsley Cemetery. Visitation will begin at 9:00 a.m. at the church on Tuesday.

Benjamin Lowell “Ben” Pratt was born on November 7, 1921 on the family farm near Kingsley, Iowa to James H. and Gola A. (Weathers) Pratt. He attended Arlington #1 country school and later graduated from Kingsley High School in 1939. From the time he was old enough, Ben worked on the family farm.

Ben’s sister, Grace Pratt, attended Westmar College in Le Mars, Iowa. This is where she met a young woman from Kansas in her English class with the same last name, Ruth Pratt. Grace later became Ruth’s roommate and introduced Ruth to her brother, Ben. Ben and “Suzy” were united in marriage on November 27, 1942 in Hiawatha, Kansas.

The couple made their home on the Pratt family farm near Kingsley, where they farmed together. They retired from farming in 1993.

Along with grain farming, Ben raised cattle, hogs, sheep and chickens. He also trucked and did custom bailing and combining.

In the early 60’s when the farm was completely hailed out, Ben worked for a blacktop company driving a bulldozer and operating a crane to feed materials to the plant.

He learned how to fly and became a private pilot, especially enjoying his first plane, a yellow Aeronca Chief. But of all things, he enjoyed being with his family the most.

Ben accepted Jesus as his Savior at a young age. He was a faithful member of the Evangelical United Brethren Church in Moville, Iowa, where he taught Sunday School and served as Youth Fellowship leader.

Starting in early 1980’s, winters were spent in Apache Junction, Arizona. Suzy sang for various programs at their RV park and Ben ran the sound system for her.

He was the popcorn popper for evening events and pancake breakfast leader there. His competitive nature became evident when he discovered his talent for shuffleboard.

For 14 years they hosted the annual “Gospel Sing on the Farm” in August. Ben and Suzy also entertained at gospel concerts throughout the Midwest. They enjoyed attending many family church camps and traveling to Arizona in their fifth-wheel trailer.

Ben will be lovingly remembered by his son, Lowell Pratt of Mesa, AZ; his daughter, Deanna Pratt of Kingsley, IA; grandson, Tony Pratt and granddaughter, Misti Visser and her children, Tyler, Corbin and wife Samantha, Kennedi and Eli of Mesa, AZ.

He was preceded in death by his parents; Suzy, his wife of 73 years; daughter-in-law, Mary Pratt; sisters, Hilma (Mrs. Ralph) Artz and Grace (Mrs. Richard) Babcock.