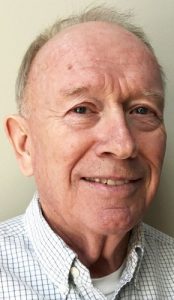 A private memorial service will be held for the immediate family at Calvary Cemetery in Sioux City. A larger gathering and celebration of Jim’s life will be held when such events are more feasible.

He married Marilyn Joyce Erickson Nov. 19, 1960 at St. Boniface Church in Sioux City; she preceded him in death.

Jim worked in financial services and purchasing and spent time living in Minnesota and Montana, and until recently he lived for many years in Sioux City.

He is survived by his sister, Joanne Wickham; his son, Daniel (Sarah) of Plymouth, Minnesota; his daughter, Amy (Craig) of Clive, Iowa; his daughter, Sherry (Jason) of St. Cloud, Minnesota; and his grandchildren Benjamin, Kathryn, Tate, Courtney, Natalie, Evelyn and Hadley.

Jim was preceded in death by his wife, Marilyn; his parents, Bernard and Frances; and his brother, Lawrence.