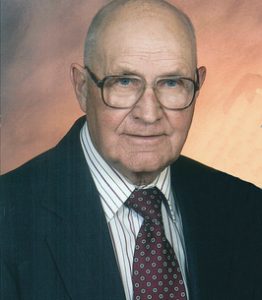 A celebration of life service was at 10:30 a.m. on Thursday, September 10 at Mauer-Johnson Funeral Home in Le Mars. The Rev. Chris Meier of St. John’s Lutheran Church in Le Mars officiated. Burial was in Memorial Cemetery in Le Mars.

Bernard Louis De Boer was born on Oct. 14, 1922, on the family farm near Doon, Iowa, to Gossom and Henrietta “Hattie” (Scholten) De Boer. He attended country school and later graduated from Hull High School at age 16.

Bernie furthered his education at Northwestern College in Orange City and then transferred to Iowa State University. He participated in the ROTC program and was a member of the synchronized horse team.

Bernie was drafted into the U.S. Navy. He taught radar and sonar during World War II. Dorothea later joined him in Chicago while Bernie taught at the Navy Pier.

After the war, they moved to Le Mars. Bernie opened A&B Appliance. He graduated from Westmar College with majors in science and math. He also studied at Texas A&M, Kansas State and Highlands University, where he received masters degrees in physics, science and math.

He used his degrees to teach at Woodbury Central High School and then at Westmar College.

He was a member of St. John’s Lutheran Church.

He was preceded in death by his parents; his wife Dorothea on Sept. 13, 2017; a son, Jerry De Boer and his wife, Sally; an infant granddaughter, Krista Marie De Boer; and his brothers and sisters.