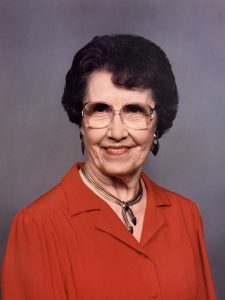 The Armstrong – Van Houten Funeral Home of Anthon, Iowa, is in charge of the funeral arrangements.

Pauline Lillian Hamann was born in rural Correctionville, Iowa near Midway on April 19, 1925 to Frank and Dorothea (Strackbein) Hamann.

She was baptized in her faith May 31, 1925, in St. Paul Lutheran Church-Midway of rural Battle Creek, Iowa. She remained an active member for 57 years, serving as a Sunday school & Confirmation teacher, LWML Boards, and Midway Cemetery Board.

In February 1982, she transferred her membership to Anthon Trinity Lutheran Church of Anthon, Iowa, where she continued to be active in many capacities.

She attended Midway Country School through the 8th grade. As was the custom after eighth grade, Pauline attended Catechism at Midway Church full-time for one year and was confirmed in May of 1939. She then attended Anthon High School, graduating in May of 1943. Pauline went on to further her education at Western Union College where she received her teacher’s certificate. She then taught 3 years in 3 country schools around Anthon.

On December 27, 1945, Pauline was united in marriage to Herman Max Feddersen Jr. They became parents of one son, Harlan. They were grain and cattle farmers northeast of Anthon after their marriage. The couple retired to Anthon in March of 1981.

Pauline enjoyed dancing and playing cards and was active in two card clubs. Her family was the center of her life, and she enjoyed attending her grandchildren’s various activities as well as the activities of her nieces, nephews and Godchildren.

She was a 66-year cancer survivor and wrote letters of encouragement to friends and acquaintances throughout the years. She was a prolific card writer and enjoyed sending and receiving notes. She was extremely strong in her faith which showed in her compassion for others.

Pauline was preceded in death by her husband of 65 years, Herman Max Feddersen Jr.; her parents, Frank and Dorothea Hamann; two brothers, Herold (Ilene) Hamann and Richard (Donna) Hamann; a sister in infancy; and several brothers-in-law and sisters-in-law.