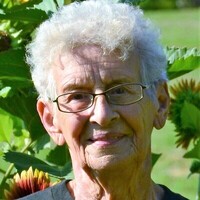 A funeral service was held on Monday, September 14 at Rohde Funeral Home.  Burial was at the Kingsley Cemetery.

Shirley was born in Wagner, South Dakota on July 31, 1931 to Oscar and Ivy (Atkinson) Swanberg.

The family moved to Merrill, Iowa where Shirley attended Liberty School.  They then moved to a farm west of  Kingsley.  Shirley attended school at Kingsley High School where she was a cheerleader and played basketball.  She graduated from there in 1948 at the age of 16.

That fall she attended National Business Training School in Sioux City where she met her future husband – Lauris “Whitey” Jensen.  After graduating from NBT she worked in the Sioux City stockyards for Rice Brothers Livestock Commission.

Whitey and Shirley were married at the Congregational Church in Kingsley on February 19, 1950.  They farmed for two years on her parents’ farm,  then moved on to Vermillion, SD and Watertown, SD where Whitey worked for Austin Dairy and Shirley stayed home to care for the two little girls they had:  Jana, born in 1951, and Kristi, born in 1953.

They returned to Kingsley and back to the farm in 1955.

In 1956 a son, Mark, was born into the family.  Shirley was an avid sewer and made all of the kids’ clothes for many years.  Shirley enjoyed several types of painting and even taught painting classes in her craft store. She enjoyed knitting, crocheting, and embroidery and always had projects going.  She helped on the farm with the milking (by hand),  raising chickens, hogs and other chores.

For ten years she worked part time at the Kingsley News Times as a linotype operator,  social columnist, “this is Shirley calling” and all around assistant.  She often worked long into the night on  Wednesday nights  until the paper was put to bed.

In 1968 she began working for the Hess Law Firm as a secretary until 1988 when the business closed.  She then purchased her craft store – Cottage Craft and Gifts which she operated until retiring in 1993.  After “retiring” she worked part time for several years for Grahams Graphics in Kingsley.

They moved to an acreage on the south end of town where she loved working in her big vegetable garden and her many flower gardens.

She became an avid quilter and enjoyed many hours of making quilts for all of her children and grandchildren.  Shirley was an active member of the Congregational Church her whole life and was a volunteer at the Kingsley Nursing Home for many years.

She loved spending time with her kids and grandkids and get-togethers with friends.  She liked going to the casino once in a while and enjoyed the early morning coffee group at Scootch’s.  Once a week for many years, she traveled to Sioux City for her music lesson where she made many good friends and even learned how to play a few songs on her organ.

She is also survived by an “adopted daughter” (foreign exchange student from Chile), Soledad Contreras Zamorono; her husband, Jaime Ferrer; and their sons, Christobal, Martin, Manuel and Thomas.

She was preceded in death by her husband, Whitey, in 2014; her parents, Oscar and Ivy Swanberg; her son-in-law, Dennie DeWall; a brother, Max Swanberg; and a sister, Phyllis Bruning.