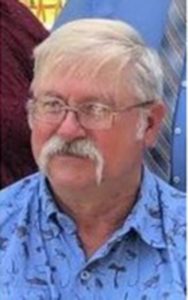 William L. Beazley, 65, of Correctionville, Iowa, passed away the evening of Sept. 5, 2020 at MercyOne Siouxland Medical Center in Sioux City.

Graveside Memorial Services were Saturday, Sept. 12th at 1:30 p.m. at the Sunset View Cemetery at Washta, Iowa.  Internment followed. Pastor John Riebhoff officiated. Online condolences can be left at www.boothbyfuneral.com. The Boothby Funeral Home in Cherokee, Iowa is assisting the family with the arrangements.

Bill worked most of his life with his father on the family farm and then owned his own land just north of Correctionville.  He also worked at Midwest Industries in Ida Grove and Quad County Corn Processors ethanol plant in Galva. Bill’s passions in life were fishing, hunting, guns and bow & arrow.  He had skills as a welder and mechanic.

A whiz at rigging and an avid practical joker, he was always ready for a laugh. Bill was also a collector and a picker, so you could find him most times at auctions.

Bill was preceded in death by his parents Ed and Lila (Backhaus) Beazley, and sister-in-law Pamela Beazley.