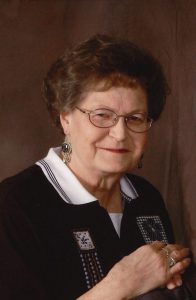 LaDonna Kay Kindig, age 80, of Anthon, Iowa, passed away on Monday, September 14, 2020, at the Correctionville Specialty Care of Correctionville, Iowa.

The Armstrong – Van Houten Funeral Home of Anthon, Iowa, is in charge of the funeral arrangements. Condolences may be sent to www.armstrongfuneral.com.

LaDonna K. (Moodie) Kindig was born on July 29, 1940, the daughter of Florin and Dorothea (Hough) Moodie. She was oldest of three children who graduated from Kingsley-Pierson High School.

On Oct. 30, 1965, she married Robert L. Kindig of Correctionville, Iowa. Over their 50 year marriage they raised four children in Anthon, Iowa, where they owned and operated the DX Gas Station for many years.

She proudly worked at the Fireside Steakhouse & Lounge in Anthon for 30 years, where she built friendships with people of all ages — co-workers and customers alike.

Over the years she spent her time with the Little Sioux Motorcycle Club, crafting stain glass, antiquing, and spending time with her husband at the casino.

Her favorite time of year was Christmas and she loved nothing more than hosting a houseful of family.

She enjoyed carrying on family traditions and creating some of her own. LaDonna had a passion for decorating her humble home all year long. Anyone who stopped by was always treated as family.

LaDonna had many pets but she especially enjoyed her cats in retirement.

Preceding her in death were her parents, Florin and Dorothea Moodie; her husband Robert L. Kindig; her granddaughter, Tana Kay Ritter; her grandson, Dash Donnelly; and brothers Curtis and Nevin Moodie.

The family would like to express their gratitude to the Anthon Rescue Squad, Mills Pharmacy, and Jim Rusch and staff for the care they have given towards Donna over the many years, as well as Correctionville Specialty Care Staff for their tenderness in her last few years of life. A special thank you to Hospice of Siouxland for all you do.