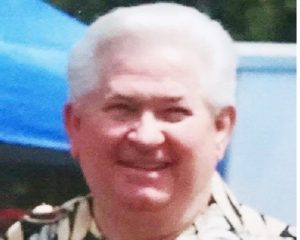 Daniel was born on Aug. 29, 1944 in Anthon, Iowa, to Daniel and Vertress (White) Fitzpatrick. Daniel moved to Sioux City as a young child and attended Immaculate Conception and Heelan High School, graduating in 1962.

Daniel was proud to serve his country as a Marine and served at the beginning of the Vietnam War. He was on the ground during the Agent Orange defoliation. Later in life, he would fight many health battles from that service. He was a Purple Heart recipient for wounds suffered in Vietnam.

Dan returned to Sioux City in the fall of 1966 and worked at Zenith for four years, where he met his wife of 53 years, Rebecca (Becky) Thieman. They were wed on July 8, 1967. They had three children, twin boys, James Michael and John Andrew and a daughter, Jennifer Melissa.

Dan worked at Sunshine Food Market for many years as produce manager. He was the best sign maker in town. He worked at Blue Cross Blue Shield for several years until taking his final position at Tyson Fresh Meats in Dakota City in Supply.

He loved his family and friends and enjoyed having coffee with his retired friends. He enjoyed going to breakfast at Glass Palace, sharing stories, driving his Corvette, and spending time with his dog, Sophia.

Those left to honor his memory include his wife, Rebecca; his children, James (Tena) Fitzpatrick of Plano, Texas, and Jennifer (Jason) Hunter of Sioux City; his grandchildren, Andrew (Lyndsi) Fitzpatrick of Vacaville, California; Joseph Fitzpatrick and Alessia Fitzpatrick, both of Plano; his great-grandson, Lukas Fitzpatrick; his sister, Kathleen Tott (Jim Wienhold) of Minnetonka, Minnesota; his aunt, Betty Card of Sioux City; and many cousins, nieces, and nephews.

He was preceded in death by his parents; two sisters, Patricia Dondelinger and Geraldine Fitzpatrick-Koch; an infant son, John; and an infant brother, Gerald.