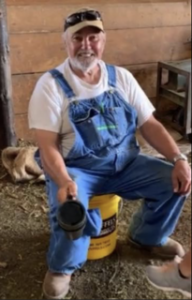 A funeral service was held Saturday, September 26, 2020 at 10:00 a.m. at the Grace United Methodist Church of Correctionville with Pastor Carl Benge officiating the service.  Burial was held at the Cushing Cemetery of Cushing.  Online condolences can be made at nicklasdjensenfh.com

Dennis Still was born in Ida Grove, Iowa on February 23, 1949 to Everett and Doris (Heilman) Still.  He was a graduate of Eastwood High School, then earned a degree in Animal Science from Western Iowa Tech.

Dennis was united in marriage to Jeanette Lee Wilson on April 18, 1970 in Kingsley, Iowa.  To this union, three children were born. He spent his entire life in Cushing and loved every day of it.

The Still family has raised sheep on the same family farm since Dennis was a child, and Dennis was an integral part of the farming operation for the last 45 years. In addition to farming, he worked part time at Anfinson’s, Mathers Construction and Goodburn Construction.

Dennis was truly passionate about the animals, but the relationships that he formed with customers were what meant the most to him. Each person who came to the farm was met with a smile and a handshake no matter what he had going on. They would then commence talking about everything from farming to weather, hunting or politics — and Dennis always had a very strong opinion!

Although he loved his children, the pride that Dennis took in watching his grandchildren grow was apparent to everyone.

He loved to play with them, watch them show sheep, and compete in their various athletic events.  In his eyes Halle, Alec, Colton, McKenna, Raelynn, and Elias were his greatest accomplishments.

Dennis was a lifelong member of the First Methodist Church in Cushing.  He enjoyed hunting, 4-H, and slow pitch softball (where he was known to hit home runs). He loved watching Westerns.

He was preceded in death by his parents, Everett and Doris Still; his parents-in-law, Arlene and Paul Wilson; and his sister and brother-in-law, Paulene and Larry Mesenbrink.