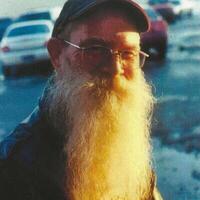 Jerry grew up in Climbing Hill, Iowa, where he graduated high school. He lived in Ohio, where he had two daughters, Julie and Cathy. He returned to Sioux City, Iowa, joining the El Forastero Motorcycle Club in 1963.

During this time, his two sons, Joe and Dan, were born. He moved to Minneapolis where he became a proud union carpet layer. He also was an artist who created stained glass windows.

He again returned to Climbing Hill and lived for a time in Holly Springs, Iowa, and became a professional truck driver. In 1985 he moved to Tucson, Arizona, where he met his wife Marie. They lived in Washington State twice, Las Vegas once. Through all of these years, he built and restored old cars and many wood boats.

They built a motor home bus that brought them back to Sioux City in 1994, and were residing in Lawton, Iowa at the time of his death.

For the last 26 years, Jerry installed carpet and built choppers- great ones. He was always happiest in a crowd, and his friends meant the world to him. He took joy in building, innovating and sharing knowledge.

He rejoined the El Forastero Motorcycle Club in 2009 and was a very active member, winning many awards with the choppers he built, and made many friends, which were more important to him than the awards.

To say he will be greatly missed is an understatement.

Jerry is survived by his wife, Marie; his brother,  John (Roxy) of Climbing Hill, IA; his sister, Kathy Wilson of Le Mars, IA; his son Joe of Jesup, GA; nephews and nieces, many cousins, a legion of friends, and his beloved dog, Rita Hayworth.

He was preceded in death by his loving father, Omer; his most wonderful mother, Ruth, who made him the man he was; and his dear son, Dan.