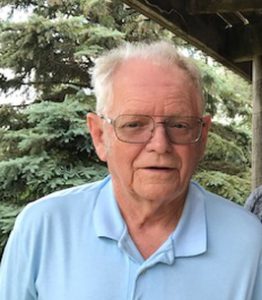 Kenneth J. Thomas, 81, of Quimby, Iowa passed away on Saturday, September 26, 2020 at the Heartland Care Center in Marcus, Iowa.

Visitation will begin at 2:00 p.m. on Wednesday, September 30, 2020 at the Earnest – Johnson Funeral Home in Marcus. The family will be present to greet friends from 5-7 p.m. with a prayer service at 7:00 p.m. There will also be one hour of visitation at the church prior to the funeral service on Thursday.

Kenneth Jens Thomas was born on April 20, 1939 near Oldham, South Dakota, the son of Cecil and Ella (Baggesgaard) Thomas. He was raised on a farm near Oldham and graduated from Oldham High School in 1957.

His first occupation was managing Ken’s Hilltop Drive-Inn in Madison. It was at the drive-inn that he met Viola Wieckert. They were wed on June 26, 1964 in Madison.

Kenneth began teaching physical science, chemistry and physics in Estelline, South Dakota. He would later teach in Sioux Rapids and Schaller, Iowa. The family moved to Marcus, Iowa in 1967 and Kenneth taught at Marcus High School. He left teaching in 1981 and became a reinsurance adjuster for Grinnell Mutual, a position he held during the summers while teaching.

Kenneth and Viola moved to Quimby, Iowa in 1987. He later retired from Grinnell Mutual and worked part-time for Buena Vista Mutual in Storm Lake, Iowa.

He was an active member of Faith Lutheran Church in Marcus. At one time he served as treasurer of the Cherokee County Conservation Board. In earlier years, Kenneth had a “hobby farm” where he raised cattle and hogs. He also enjoyed the outdoors and hunting, woodworking and playing cards.

Grateful to have shared his life is a son, Mike and his wife Sue and their sons, Marcus and Mason of Roland, IA; a son, Brian and his wife Renee and their daughter, Allison of Bradenton, FL; sisters Mary Lingbeck of Madison, SD and Cecelia Sweeney and her husband Tim of Sioux Falls, SD; and a brother, David Thomas of Rapid City, SD; along with nieces and nephews.

He was preceded in death by his parents; his wife, Viola on June 3, 2006; a sister-in-law, Bev Thomas; and a brother-in-law, Joe Lingbeck.