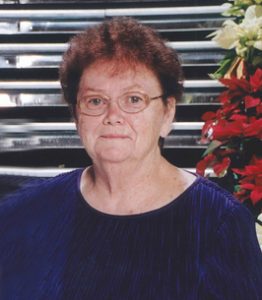 Beverly Lou Weber entered this world on December 30, 1933 in Kingsley, Iowa, the daughter of Thomas and Lucille (Doyle) Bainbridge. She attended grade school and graduated from Union High School.

Bev met the love of her life, Wayne Weber, and later married him on February 10, 1958 in Kingsley. They made their home on the Weber family farm south of Le Mars, Iowa. Bev stayed at home with her children as they were growing up. She then went to work at Jolly Time Popcorn and Wells’ Dairy.

Her last job was greeting everyone at Walmart, she absolutely never met a stranger and since she was born with the gift of “gab,” this job went perfectly with her outgoing personality.

While living in Le Mars, Bev was a member of the United Methodist Church. She was also a dedicated member of the American Legion Auxiliary and served as its president for many years. In earlier years, Bev was a board member and coached Little League softball. She also briefly helped coach basketball at Gehlen Catholic.

As a coach she inspired young people by pushing their limits, not just to become better athletes, but a better person of themselves.

Before she was married, Bev was a dance instructor for Arthur Murray. She and Wayne loved to dance, especially polka dancing which they enjoyed to do on Saturday nights while listening to the Jesters or while at the Lakeview Ballroom.

She bowled for over 20 years with the same team members, traveling to tournaments throughout the area and the United States. Most recently, she kept in touch with the Le Mars community through Facebook.

Bev was a legendary story teller and if you knew her, you will remember hearing the same stories over and over again – she would share with anyone that would listen!

She was preceded by her parents; husband Wayne on September 12, 2011; her son Patrick on August 29, 2009; a sister, Janet Coughenour; and brothers Beryl and Donald.