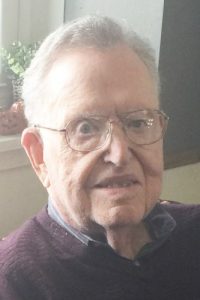 Services will be at 10:30 a.m. Friday, October 9 at CrossPointe Church (2300 W. 19th St. in Sioux City). A lunch will be served immediately following the service. Interment will be in Memorial Park Cemetery. Visitation will be 5 to 7 p.m. Thursday at Meyer Brothers Colonial Chapel (3220 Stone Park Blvd. in Sioux City).

Boyd was born to Leo and Mamie (Schoen) Hoferman on Nov. 15, 1926 at their farm just outside of Alta, Iowa. He was a graduate of Alta High School in 1944. With plans of becoming a band director, he attended Buena Vista College that summer, but during that time, he received a call on his life from God to become a pastor.

Boyd enrolled in North Central Bible Institute, known today as North Central University, in Minneapolis. He graduated from NCBI with a degree in pastoral ministry in 1947. While at NCBI, he met his future wife and love of his life, Marilu J. Crowell. The couple were married on June 2, 1948, in Omaha.

Throughout their marriage, you would often hear Boyd singing, “Lulu’s back in town,” with a big smile across his face, as her nickname from him was Lu. During the first 15 years of marriage, Boyd became dad to four daughters: Rita, Muriel, Juline and Lori.

He had a weekly radio program on KTFC in Sioux City. Boyd also worked for Sears in Sioux City from 1970 to 1984. Boyd retired from full-time pastoral ministry in 1995 and took a part-time staff position at CrossPointe Church.

On June 2, 2020, the couple celebrated 72 years of marriage. In August, Boyd celebrated 70 years as an ordained minister with the Assemblies of God.

Boyd’s life was one of great sacrifice and love for others. He never stopped giving of himself even in the last months of his life.

Boyd’s greatest gift to his wife and family was the example and heritage that he lived out. He loved God and taught his children to love God.

He loved his family and taught his children to love and value family above all other people. He loved hard work and instilled that work ethic in his daughters.

Boyd loved giving to others in need. He was beloved by people he ministered to and everyone who later in his life took care of him.

Up to the end, Boyd would lift his hands in worship and praise to God. The words “thank Jesus” were always on his lips. One of the last days he had on this earth, he and his daughter spent singing many old hymns. He would smile and say, “Let’s sing it again.”

Boyd was preceded in death by his parents, Leo and Mamie (Schoen) Hoferman, and brothers, Duane Hoferman and Clinton Hoferman.

Boyd’s family wishes to thank Woodstone Senior Living and the hospice workers with the Mayo Clinic for the medical expertise, love and support they offered to Boyd and family.

Memorials can be made payable to Iowa Ministry Network with the memo line Light for the Lost.