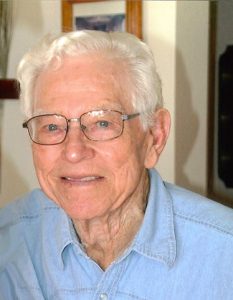 Rex Abner Persinger, 98, of Hornick, Iowa, passed away Friday, October 2, 2020, at his residence surrounded by his family.

Funeral services will be at 11:00 A.M. Thursday, October 8, 2020 at the Rush Family Chapel in Onawa, Iowa, with Pastor Catie Newman officiating. (Social distancing measures must be followed. Due to COVID-19 restrictions, masks are encouraged).

Burial will be in Grant Township Cemetery in rural Ticonic, Iowa. Military Honors will be provided by Emery Johnson American Legion Post #481 of Whiting, Iowa and the United States Army Air Force. Visitation will be 10:00 to 11:00 A.M. Thursday, October 8, 2020 at the Rush Family Chapel in Onawa, Iowa.

Arrangements are under the direction of Rush Family Care Service of Onawa, Iowa.

Rex Abner Persinger was born February 13, 1922 in Ticonic, Iowa, the son of Abner Lewis and Maude Roselene (Smothers) Persinger. He grew up in the Grant Center area and graduated from Hornick High School in 1938. He went on to Grand Island College for Business/Accounting and graduated in 1942.

Rex worked a couple of years at the Federal Building in D.C. before joining the United States Army Air Force.

He typed various forms in the Treasury Department and did filing work. He worked with the payroll clerks, and assisted in posting all disbursements to ledger. Rex served with the 1561st Army Air Force Base Unit in the Pacific Theater during World War II. He spent nine months overseas.

As a clerk he performed a variety of clerical duties such as handling all correspondence, special reports, payrolls, and some personnel work. Rex maintained a classified file of all correspondence and government reports and orders.

He was awarded Good Conduct Medal, and Asiatic Pacific Theater Ribbon. He served from 1942 until his honorable discharge in 1946.Rex and Rose Marie (LaBrune) Persinger were united in marriage on April 24, 1946, at the Persinger family farm. They spent many years together on the farm working side by side and raising their children.

Rex was a lifelong farmer. He enjoyed working with wood and making lots of items for his family and friends. He was a member of the Ticonic United Methodist Church, and the Emery Johnson American Legion Post #481 for 76 years in Whiting, Iowa.

He was preceded in death by his wife, Rose Marie Persinger; his parents, Abner and Maude (Smothers) Persinger; and two daughters-in-law, Brenda Persinger and Kathleen Persinger.