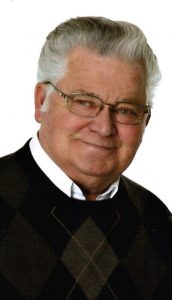 A funeral service was held on Monday, October 12, 2020 at 11:00 a.m. at the United Methodist Church of Moville with Pastor Jill Clem officiating the service.  Burial was held at the Arlington Cemetery of Moville.   Military rites were conducted by the American Legion Wink-Sparks Post #303 of Moville.

Upon return from the Navy he attended Barber School and graduated in 1959.

Gary was united in marriage to Sandra Jensen on February 16, 1963.  They made their home in Moville where Gary worked as a welder and fabricator for Schaff Manufacturing.

After retiring, he opened Bake’s Barber Shop in Moville, working part-time as a barber for 20 years.

Gary loved working in his garage repairing mopeds and building three wheel motorcycles.  He enjoyed dressing up as Santa Claus for 44 years in Moville and the surrounding communities.

He was preceded in death by his parents and two brothers, Bob and Howard.