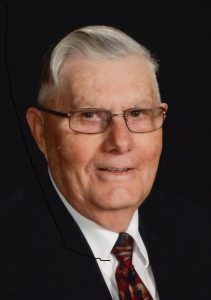 Funeral services are at 11:00 a.m. Thursday, October 15, 2020 at Calvary Lutheran Church (4400 Central St.) in Sioux City.  Burial will be at Banner Township Cemetery, Lawton, Iowa.  Visitation will be Wednesday from 4:00 to 8:00 p.m. with the family present 5:00 to 8:00 p.m. and a prayer service at 7:00 p.m. at Meyer Brothers Colonial Chapel in Sioux City.  Attendees are encouraged to wear a face mask  The service will also be live streamed on the church’s website www.calvaryleeds.com.

Wilbur Eugene, the son of Richard and Lavern (Burcham) Lieber, was born July 18, 1927 on a farm near Emerson, NE.

On February 19, 1955, Wilbur was united in marriage to Donna B. Edgington at Redeemer Lutheran Church and this union was blessed with five children.  Wilbur and Donna farmed near Hinton and in the spring of 1958, they moved to their present farm.

Over the years, Wilbur raised row crops, cattle, hogs and chickens.  He did custom corn shelling and bailing for many area farmers and also trucked for several years.  Wilbur sold seed corn for various companies for 40 years.

Wilbur loved going to auctions to find a good deal, as well as bowling.  Through his seed corn business, Wilbur and Donna enjoyed several trips which included going to Germany, Hawaii, the Bahamas and Acapulco.  They also enjoyed several bus trips.

Above all, he enjoyed spending time with his family.  He was so proud to share his birthday with his oldest grandson Dustin.  Wilbur was a member of Calvary Lutheran Church in Sioux City.