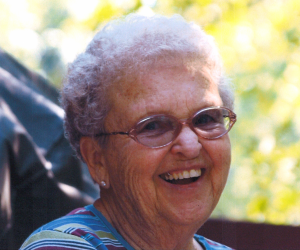 Maxine Hefner was born January 9, 1925 to William and Mildred (Duncan) Conaway in Tarkio, Missouri.  She graduated high school in 1943 in Parnell, Missouri.

She was united in marriage to Verdene Hefner on February 19, 1953 in Omaha, Nebraska and they made their home in Cushing, Iowa where they raised their family of five children.

In 1945 Maxine began work at Boeing Corp building B29’s, then worked as a nurse/ nurse’s aide in Clarinda.  She started driving truck in 1950. Maxine continued driving when she and Verdene started their own trucking business in Cushing in 1957, which they operated until 1969.

She worked as a custodian for Eastwood School until 1973, then drove for Kay Dee until 1977.  Maxine drove a school bus for over 40 years, taking students to and from school and to countless athletic and band events.

Maxine was a member of St. John’s Lutheran Church of Cushing until moving to Sergeant Bluff and joining the Shepherd of Peace Lutheran Church.  She loved animals and enjoyed traveling, playing cards and camping.  In her younger years Maxine loved playing the piano and dancing.

She is survived by her children, Sharon (Jerry) Henningfeld of Sioux City, IA; Darnelle (Michael) Ellsworth of Sioux City, IA; Randy (Connie) Hefner of Adel, IA; Rod (Mary) Hefner of Sergeant Bluff, IA and Rich (Linda) Hefner of Cushing, along with 12 grandchildren and numerous great-grandchildren.  She is also survived by her sister, Ramona (Chuck) Thomas of Stanwood, MI; and her brother, John (Marjorie) Conaway of Rogers, AR.

Maxine was preceded in death by her parents; her husband Verdene in 1994; and her brother, Eugene “Bill” Conaway.