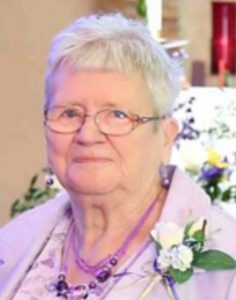 A funeral service will be at 10:00 A.M. Thursday, October 29, 2020 at First Baptist Church in Climbing Hill, Iowa.  Visitation will be Wednesday, October 28, 2020 from 5:00 to 7:00 P.M. with a prayer service at 7:00 P.M. at Mohr & Becker-Hunt Funeral Home in South Sioux City.  To watch the prayer service online please visit https://www.youtube.com/watch?v=9jjTVW1L4bA&feature=youtu.be.  Burial will be at Westfork Township Cemetery in Climbing Hill.

The family requests that all who attend the gatherings wear facemasks. We respectfully ask that no judgment be made over who attends (or not), who social distances (or not), and who gives hugs/handshakes (or not).  Online condolences may be directed to meyerbroschapels.com.

Elaine was born on September 4, 1939 in Breckenridge, Minnesota to Alfred and Lou Ida (Bendt) Manthie. She grew up in Tenney, Minnesota where she was active in 4-H and in her church choir. In the summers, she attended church camps, where, in 3rd grade, she was hiking on a trail, fell, and sprained her ankle, necessitating four boys from the camp to carry her back.

Elaine graduated from Campbell, Minnesota High School in 1957 and attended Westmar College in Le Mars, Iowa where she became reacquainted with one of those boys who had carried her at camp — Mal Streyffeler, who would become her husband.

She graduated from Westmar with an Associate’s Degree and teaching certificate in 1959 and went on to become a kindergarten teacher at Grand Meadow, Iowa.

Elaine and Malcolm were married on December 27, 1959, at Meadow Star Church near Grand Meadow, Iowa. The couple had two daughters: Sherry and Tami. After her marriage, Elaine became a teacher or substitute teacher in various towns in the Upper Midwest as she followed Mal where his jobs led him.

She briefly attended Dakota Wesleyan and then returned to college at Morningside College with Sherry in 1979, graduating in December of 1983, class of ‘84, with a Library Science major. In 1981 Elaine, Mal, and Tami moved to South Sioux City. Elaine began her job as a school librarian at South Sioux City Junior High in 1984.  Mal passed away in 1990.  Elaine worked at the library, watching over many children, both related to her and related to her by heart. She retired from South Sioux City Middle School in 2005.

In the year 2000, Elaine met and began seeing Walter “Ping” Davis of Climbing Hill, Iowa, and the two shared time between her home in the city and his home in the country. Through her years, Elaine was a Girl Scout leader, Sunday School teacher, Bible study leader, piano player at church, a charter member of C.H.A.T. for 20 years, and a member of First Baptist Church of Climbing Hill where she served as the secretary for the church board.

In her free time, she enjoyed watching the activities of her grandchildren and great-grandchildren, eating out, scrapbooking, crocheting, doing crosswords, and reading.